Scroll down to select a specific donation type. Or, donations can be mailed directly to:

Donations are the heart and soul of our success. We are who we are because of generous members of Three Lakes and other communities. It’s not about the size of the donation. It is all about what one is able and willing to give. We receive donations from $10.00 on up. Donations can be of a general nature, a Memorial Gift or to sponsor an event. We have listed four of the most common areas for which we receive donations and hopefully you can match your passion with our projects.

Donations can be made by check or credit card. Remember TLCFA is 501(c3) corporation, all donations to us are tax deductible. If you are going to use a credit card, click on “Donate” below and it will allow you to make a donation in any amount you wish. Note on the memo line if you wish to be sent a tax letter and or the reason for the donation (especially if it is to memorialize someone). If you are going to send a check, send to: TLCFA PO Box 126 Three Lakes, WI 54562. Thank you for your consideration.

Become a permanent part of Three Lakes Center for the Arts! Your name – or the name of a loved one, family name, etc – is engraved on a plaque and attached to a seat (while every effort will be made to place the plaque on a specific seat, many seats already have plaques).

Indicate your preferred text in the NOTE section of the Shopping Cart.

Reliance on donations for specific projects has moved TLCFA over the years.  TLCFA also has had a revenue stream from the Gallery, Movies, Live Performances, and the Concession stand.

To insure long term stability, we have established an endowment whose interest could be applied to areas of operations or projects as needed. Donations may be made directly though credit card or check.  Heritage donations may also be made by naming TLCFA Endowment Fund  in your will. 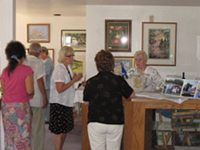 The remodeling on the lobby/gallery at the Center allows us the opportunity to have a “clean slate”. Our local artists are going to make this space a ‘new beginning’. They will reflect on the space, how it has been used and recreate it, incorporating the lessons learned over the past five years and experiences in other galleries.

A major key to a Gallery is lighting. Modern technology in lighting allows us various options of lighting. The bay windows in the space will be replaced with windows that are more energy efficient and also filter out UV rays – giving more protections to the artwork inside. We will introduce a mix of Halogen, Incandescent and Florescent lights with LED lights. The mix of LED spotlights and floodlights on dimmers will allow us to light the pictures hanging on the walls along with 3 dimensional object in the room with dramatic effect. The cost of this upgrade is about $1,800.00 in materials plus the cost of the electricians. We already have a grant from Wisconsin Public Service to cover a part of the lighting fixtures, but need about $1,500.00 more to covers all costs, bottom line is $3,300.00 for the new lighting.

Wall surface is also another consideration. The plan is to paint the walls with “spectrally neutral” 18% shade of gray. The hanging walls will have tracks around their tops to hang the heavier pictures, and there is discussion of covering the walls with a recycled pulp product (possibly covered in fabric) so that objects may be pinned or hung on nail supports and then replaced without any visible damage to the wall. The paint is relatively inexpensive and we have willing volunteers to paint. The fabric covered wall system costs upwards to $5,000 to have this outstanding system.

Live performances are a key element in the mission of Three Lakes Center for the Arts. The number of performances as well as the quality of the artists has increased over the past several years. This year will no exception, as seen in the already scheduled events.

We have a limited capacity 107 fixed seats, with additional Bistro seating of 13 which bring our total to 120. By setting up chairs on the dance floor we can a legal limit of 135. This seating limitation reduces the amount of tickets we can sell and our ability to pay the artists.

Artists have been very cooperative in pricing themselves and booking with TLCFA. They generally make our theater as part of venues in Northern Wisconsin in the area to make their trip worthwhile. Some of the artists have returned just because they love the venue.

Underwrite a live performance that meets you passion – the range is between $1,000 and $2,500 for each performance You will be recognized, if you want, with a banner up front.

There are several ways of alleviating this problem

1. Eliminate the on stage monitors The monitors we use are essentially another sound system that project sound into the house. Most performers need them loud to hear themselves and as a result 40 to 50% of the sound in the house comes from the monitors. We can’t eliminate monitoring systems without the performance suffering, but we can eliminate them by the use of wireless, in-ear monitors. This system would allow us to let up to 6 performers to hear the sound mix best for them (what performers really like) and reduce the sound projected from the stage. This requires us to replace our present (and becoming unreliable sound board) and purchase 6 wireless in-ear monitors at a cost or about $3,500.

2. Control the ambient sound from the stage The stage itself either reflects or absorbs sound and at this point and we do not have a system in place. The proposal is that we create a wall that can be placed in front the present movie screen. This wall would be built in sections and be two sided, one side would reflect sound outward, enhancing acoustic performances (not needing amplification) and reducing sounds from loud amplified bands. In addition sound absorbing materials would be put around the proscenium arch to absorb the “back slap” sound, enhancing the over-all acoustics of the theater. The construction and material costs of this project is about $1,300.

3. Control the Drum Kit The hardest thing to control on any stage is the drummer. We usually have to increase the sound both in the house speakers and the audio monitors to have the vocals heard over the drums. The solution is a Drum Surround. This is a set of 5 or 6 clear acrylic panels about 2 feet x 6 feet. The problem in using them is then we don’t have enough sound so we would also need a set of mikes (specifically designed for drum use) and a small mixer to the drummer could set his own balance while we control the drum into the overall mix. The cost of these projects is about $1,800.

4. Set the mood At present, we can only illuminate the stage. There is no real control of lights, they are hard to reach, change angles or color. Lighting implies the ability to change mood, direct attention, add excitement and so on. The solution is to purchase a lighting control system and a system to give us the ability to put lights in the proper place to the best effect, called rigging. As part of this project we would remove the light standards and spots and, as a result clean up the theater look. The cost of the lighting system would be about $4,000 and the rigging about $1,500.

The major work of upgrading our movie capability was done last year when we received the funding from the community to “go digital.” The reaction to this move was overwhelmingly received. There is still work to do in the theater to enhance the movie going experience. Help by underwriting a movie as we get our movies on a percent basis. This means we pay the film distributor about 40% of each person attending. We have additional fixed costs of the projectionist, heating or air conditioning and electrical costs. Our concession stand is usually staffed by volunteers. Donations in any amount are appreciated. We have donation cans by the doors and your loose change makes a difference as does a little paper.

Lighting Again most of the lighting changes have been made; we’ve installed dimmable red lights in the soffit, reminiscent of the neon lights that were there originally. We’d like to extend the art deco architectural detail along the back about 2/3d the way down the theater and continue the red lighting these. This detail should also reduce the visual impact of the surround sound speakers. We’re looking at around $2,000.

Concession Stand The heart of the movie going experience. Plans are not final on this project, but any change will mean that the counter tops will be replaced and open storage shelves added. More aggressive sound deadening materials will be used to reduce sounds of the cooler, soda machine and vent fans. We also hope to replace the front counter with a glass candy display case as would have been in the original theater. A big part would be to move the popcorn machine into the opening so that the front of the machine is visible. It’s about a $4,000 project (A secret wish is that someone would pay for a complete restoration job on the 1947 Cretor Hollywood 48 machine [about $12,000].

Any underwriting of movie would also be appreciated. We get our movies on a percent basis, there are still costs of the projectionist and concession stand (we traditionally hire a student to help them out) there is also air conditioning and electrical costs, some times we cover that and sometimes we don’t. Donations in amounts of 100 per night would be appreciated.

There are no upcoming events.