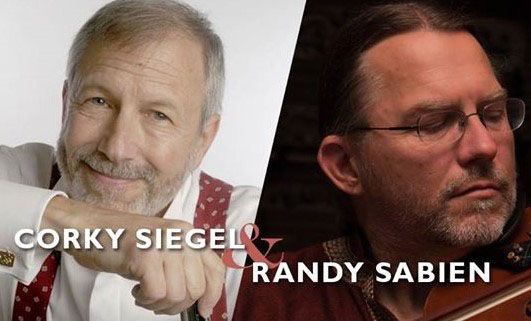 Get a little taste if Corky and Randy in Action! Click below to watch a preview.

For over 50 years, Corky Siegel has been performing and learning at the feet of greats, like legendary Muddy Waters and Howlin’ Wolf. Corky is co-founder of the Chicago favorite, The Siegel/Schwall Band, and a Chicago Blues Hall of Fame inductee and Lifetime Achievement awardee. He is known internationally as one of the world’s great harmonica players, blues pianists, and singer/songwriters, weaving blues and classical forms together.

The Chicago Tribune said of violinist Randy Sabien, “Listen closely to Sabien’s great cascade of notes and you will hear the grand arpeggios, broken octaves, double stops, trills and tremolos that have marked classical violin playing since the work of J.S. Bach!” But Sabien also plays guitar, piano, mandolin and sings – as well as composes. He founded the string department at Berklee School of Music at 21 and has continued as an educator, as has Siegel.

In addition – these guys are crazy fun and you’re going to love them!

PLEASE NOTE: Corky Siegel has asked that all folks coming to show be vaccinated and wear a mask (except when eating or drinking).